Required Viewing: Stranger than Paradise & Down by Law (A Jim Jarmusch Double Feature) 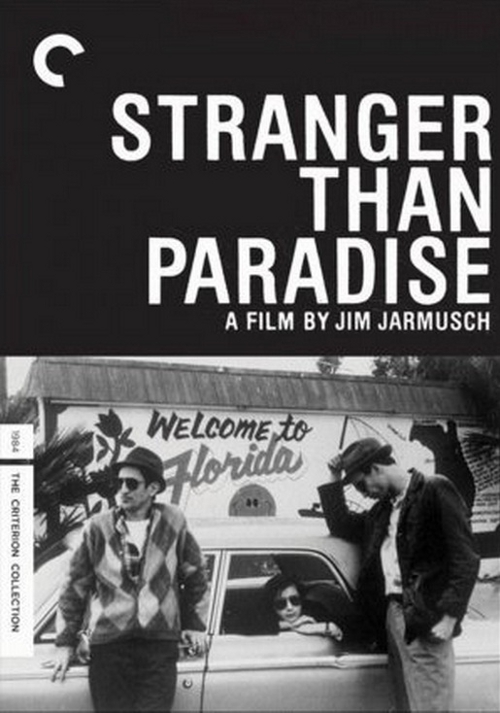 My first exposure to writer/director Jim Jarmusch was via 1999’s Ghost Dog: Way of the Samurai: a film from which I expected ridiculousness and received greatness.  Since then I’ve watched a handful of his films and enjoyed each, but still had yet to see Stranger than Paradise, his first project post film school.  That oversight was finally corrected this weekend, when its number came up on the required viewing list for class.  The fact that I quickly followed it up with his next film, Down by Law, should tell you something about how I felt about it, but since I’m not going to get the opportunity to write about it for class, perhaps you’ll humor me.

Like I said, Ghost Dog was my first experience with Jarmusch.  If you haven’t heard of it, check this out.  It’s a mash-up of American gangster movies, hip-hop culture, and the works of Akira Kurosawa, starring Forrest Whitaker as a soft spoken mob hitman who lives on a rooftop with a coop full of pigeons and lives his life according to wisdom gleaned from the Hagakure, a 300 year old text written as a cultural guideline for samurai.  A man who can make that work can do anything, but much of Stranger than Paradise‘s charm comes from the appearance of Jarmusch doing so little.  And in doing so, he managed to lay the bulk of the groundwork for the understated indie film wave of the 90’s, six years ahead of schedule.

Stranger than Paradise stars John Lurie as Willie, a Hungarian immigrant trying his best to be anything but, living in a tiny run-down apartment in New York City.  The film opens with a phone call from his mother stating that his cousin Eva (Eszter Balint) will be coming to stay with him for a while en route to her aunt’s house in Cleveland.  Willie, wanting nothing to do with his family in general or Hungary in particular, is resistant.  Eva arrives anyway, and Willie lays down the ground rules (no Hungarian, only English), followed by several days of awkward close-quarters living where the only real conversation seems to be an explanation of the TV dinner concept.  Willie eventually comes around, due in no small part to Eva stealing a carton of cigarettes for the apartment, and is visibly let down when Eva finally moves on towards Cleveland.

A year passes, and along with his friend Eddie (Richard Edson), Willie decides to take a trip to Cleveland to visit Eva, funded by some less than honest poker winnings.  Eddie’s crush on Eva was apparent from the start, so he agrees and the two hit the road, stopping a few blocks away to ask a random bystander “Which way is Cleveland?”.  Eva is happy to see them when they show up, as is her and Willie’s aunt Lotte (a non actress, Cecillia Stark, with a super charming performance), and Eva’s date is less than enthused.  After a few days in the arctic tundra of Northeast Ohio, Eva expresses her desire to go someplace warm, and a two-person trip to Cleveland turns into the world’s least extravagant Florida vacation.

Always interesting to see Cleveland in a movie. This is a sight that I am familiar with!

The film is an exercise in economy and simplicity, the kind of minimalist effort that only the most skilled filmmakers can be comfortable with.  It was filmed on location in New York, Cleveland, and Florida, and that attention to authenticity is nice.  But without living in Cleveland to recognize the street signs, you’d hardly know it.  Most of the action takes place inside small homes and hotel rooms, one of the exceptions being a trip to “the big lake” in Cleveland, consisting of an almost entirely white screen.  Which, during most winters, is accurate.  The camera is often stationary and rarely does anything beyond panning slowly to one side or the other, and every scene is a single shot, strung together with a few frames of black in between.  Even the soundtrack consists largely of “I Put a Spell On You” by Screamin’ Jay Hawkins, played at intervals by Eva on a small single-speaker tape deck.  The weight of the film rests on its script and the performances of the small cast, and every subtle nuance is allowed to shine through without a single distraction.  It’s beautiful when it works as well as it does in this film, and its influence is immediately clear on other movies that I’ve loved for years, like Kevin Smith’s Clerks or Richard Linklater’s Slacker.  Clerks in particular likely owes a large debt to this film, but also captures the feel of it better than anything else I’ve seen.

After Stranger than Paradise came to its sad but perfect conclusion, I immediately wanted to watch it again.  I thought it might be more productive, however, to move on to Jim Jarmusch’s next film, 1986’s Down by Law.  It shares a lot in common with its predecessor, namely a three person principal cast: this time, John Lurie is joined by Tom Waits and then-newcomer Roberto Benigni.  And again, all three characters are inexplicably likable despite doing so many unlikable things.  This time, the New York apartments and Florida hotel rooms give way to a Louisiana prison cell.

At the beginning of the story, small-time pimp Jack (Lurie) is set up by a rival and caught by police while attempting to recruit (unbeknownst to him) an underage girl.  At the same time, unemployed radio DJ Zack (Waits), is kicked out after a fight with his girlfriend, and soon finds himself driving a Jaguar with a dead body in the trunk.  This is also a setup, he’s unaware of the body but a pair of cops that pull him over seem to know right where to look.  The two strangers find themselves sharing a cell with Roberto (Benigni), an Italian who carries all the English he knows in a small pocket notebook and speaks mostly in cliches and anecdotes from the old country.  Of the three, Roberto is the only guilty party, having accidentally killed a man in an argument by throwing a billiard ball at his head.  But as Roberto insists, he is a “good egg”, and that much is apparent.

Some time later, Roberto informs his cellmates that he’s discovered an escape route accessible from the exercise yard, and the next thing we know the three men are tearing through a sewer and towards freedom, without any hint to what that glaring hole in penitentiary security may have been.  In some movies that might feel like a cop-out, but here it’s simply part of Jarmusch’s trademark charm.  His films are otherwise so understated, and the characters so utterly relatable, that the occasional omission or leap in logic is acceptable.  By the time we as an audience are asked to take that leap, we believe in everything else so deeply that we hardly notice.  At any rate, they escape successfully, depending on one’s definition of success.  There’s still a long trip through Louisiana’s vast bayou country to contend with, and nobody seems to know quite where they are or which direction to go in.  Jack wants to head east because he’s heard Mississippi will grant a retrial if they are apprehended again.  Roberto is for making their way towards Texas, because it looks interesting in “American movies”.  Zack seems to simply want to keep moving.

The three men seem inexorably tied to one another; they run across a fishing shack with an interior bearing an uncanny resemblance to their cell, and attempts to split up are futile and short lived.  A frustrating inevitability for them is a welcome situation for the audience, however, as the interactions between the three make it hard to believe the actors weren’t a seasoned team.  Lurie and Waits in particular seem like such a good team that their occasional fistfights are almost hard to believe.  Benigni is endlessly funny, with a constant string of optimistic naivete and non sequiturs and not a malicious bone in his body.  He came out of prison with two friends, and nothing else in the world seems to matter to him.

While I liked Stranger than Paradise slightly more out of the two films, Down by Law is a clear step forward stylistically for Jarmusch, taking his prior work and infusing it with elements of film noir and a greater emphasis on the journey, rather than just suddenly arriving at locations.  The simple camera work of the prior film carries on through the prison scenes before giving way to a more elaborate look as the three escaped prisoners take a boat across the bayou, weaving between the dense cypress trees.  The film is again shot on location and Jarmusch seems to adapt to the unfamiliar territory extremely well.  The soundtrack is excellent and suits the film well, as it should since it consists entirely of music by Tom Waits and John Lurie.

Jarmusch is rapidly transitioning from “director of some of my favorite films” to “one of my favorite directors”, and after this double feature I’m incredibly eager to get to the last few things in his filmography that I haven’t seen.  These are great films to just sit back and watch; unlike many indie films that have come since, you don’t have to “try” overly hard as a viewer, they just bring you everything you need.  There’s a complexity to the characters but it’s never unrealistically dense, and everything is shot in a way that invites the audience along for the ride without ever jarring them out of it.  These films should both be required viewing for aspiring filmmakers, but I’d really recommend them to almost anyone,  it’s hard to imagine getting through either and realistically being able to say you didn’t enjoy yourself.

I like watching movies, and then talking about those movies. Sometimes I write things about them, which you should read. Other interests include boxed wine, video games, the works of Harlan Ellison and HG Wells, and being a general curmudgeon.
View all posts by Ryan Searles »