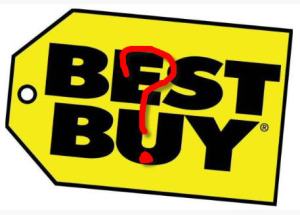 Let me start by saying that I am a Best  Buy Reward Zone Premier Silver member. I guess that means that I’m a boss like Rick Ross in the Best Buy world or something like that. I’ve achieved this status by pretty much only buying movies and TV shows. Rewind to two weeks ago. I walked into my local Best Buy to browse the movie sales like I always do and what I saw caused me to become overwhelmed – so much so that I walked out of the store to go to another Best Buy. When I went to the other Best Buy, I was equally overwhelmed. What could be so overwhelming, you ask? Best Buy has combined their DVDs and blu-rays into one section! You may not think this is a problem but until you’ve seen it but trust me when I say that it is not a pretty sight.

It looks cluttered with the two formats sharing the same shelf space. Boxes are of differing sizes, there are more spines than covers displayed, and sale tags are almost non-existent. One of my favorite things about Best Buy is that I can walk in at any given moment, and be greeted by a sea of sale tags that give me butterflies. Yes, I’m a dork. That’s part of the fun, going to Best Buy to see the sales that aren’t in their weekly ad.

I’m sure this is Best Buy’s way to phase out DVD and crown Blu-Ray as the top dog of physical visual media formats but who wins in this situation? Let’s face it – people will buy the wrong format. They’re just dumb. For example, my local library puts a sticker on all blu-ray cases that reads: “BLU-RAY DVDS ONLY PLAY ON BLU-RAY PLAYERS”. People have to be told that blu-ray “DVDs” are different than DVDs. Lately, Best Buy’s sales on blu-rays have been unbeatable with dozens on sale at $7.99 and $9.99 every week, likely an incentive to get DVD buyers to switch format. Additionally, Best Buy has been running their Upgrade and Save (trade-in a used DVD and receive a coupon for $5 of a blu-ray $9.99 and higher) promotion with more frequency. One would think that combining the formats in the same selling space, would be the perfect opportunity to exploit blu-ray prices and set prices lower than those of DVD. But, alas, the sales I’ve come to know, love, and stack with other promotions are gone!

Actual photo of me in the movie section at Best Buy

In addition to lighter sales, I am now forced to look at a format that I’m not interested in and will never be interested in again. I can see the appeal to get DVD owners interested in blu-ray but my Best Buy visits will now be three times longer and ten times more frustrating as I have to look at DVD copies of every movie Best Buy has to even see what I may want to purchase. There is no clear winner here. All shoppers regardless of which format they prefer will be forced to look at products they have no interest in. What if all video games were arranged alphabetically regardless of console? How would an XBOX 360 gamer feel about having to be forced to sift through hundreds of third-party Wii games to find the 360 title he wants to buy? VHS and DVD formats were never combined as a way to get VHS viewers to adopt DVD.  Why not focus on selling blu-ray players to encourage blu-ray sales in the blu-ray aisles?

3D blu-ray titles are also mixed in alphabetically. I do not own a 3D blu-ray player but this could be frustrating for someone who does. It is such a special niche market and those items deserve to be displayed separately so buyers can find them easily. Additionally, Criterion Collection titles are separated out by genre. There wasn’t a standard among Best Buy stores before – some stores had them lumped together under C, some had them alphabetically, and others did a weird combination of both. Now buyers have to guess which genre Best Buy classifies a title under. Is the Criterion documentary For All Mankind action, comedy, drama, or horror? It’s none of those but it has to go somewhere. 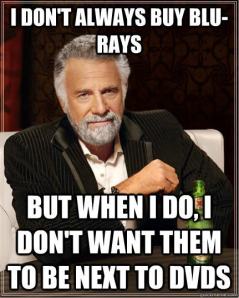 Bottom line, Best Buy is in the selling business and it needs to thoroughly assess its selling practices. The only way to encourage blu-ray sales using the format and not the player is to eventually make it the only option. Putting the two competing formats together will not have an end result that will justify the product placement. Many DVD purchasers are unaware of the differences between DVD and blu-ray other than price. Putting the two formats together further facilitates that divide. Making the DVD selection smaller and growing the blu-ray selection is necessary — and keeping the formats separate is doubly necessary. Best Buy is still trying to gather its wits after closing 50 stores nationwide earlier this year and appointing a new CEO and perhaps this was part of the wit-gathering process. I hope that Best Buy recognizes this flub and corrects the issue.

I have an unhealthy obsession with Prince, The Artist, The Purple One. You know who I'm talkin' 'bout. I have a shaved head and I like being dudes with hair for Halloween. My nerd claim to fame is my love of Thor, The Wire, Buffy the Vampire Slayer and that I am the human version of C-3PO. Follow me on Twitter - @XineSoundclash. I'm real funny.
View all posts by Christine Pyles »

Posted on October 17, 2012, in Movies, Opinion, Uncategorized and tagged best buy, blu-ray, clusterfuck, do not want, DVD, My Opinions are Factual, organization, stop doing this, this is a bad idea, why?????. Bookmark the permalink. 3 Comments.