Disney Buys Lucas Films: Why This is Good News 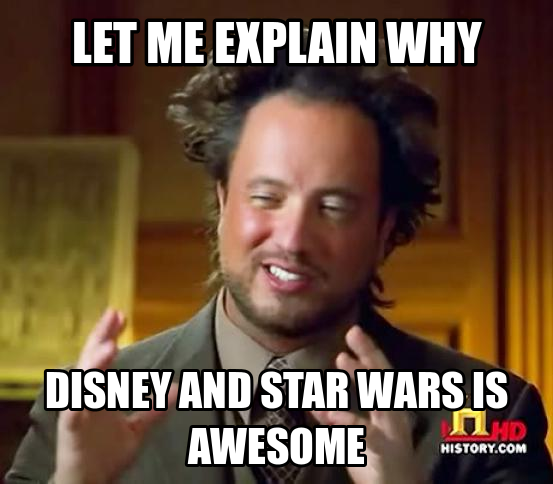 It is an energy field found in all things. It unites us, it binds us, it brings the galaxy together. Those words sparked more hope, inspiration, and deep feelings of what it means to be a good person than the entire sum of the rest of my whole life has to this very moment. I was hooked young, some of my earliest memories are of watching the Star Wars trilogy.

I vividly remember enjoying a trip to my grandparent’s house because it meant I got to watch her copy of Empire (I didn’t own an actual copy at home until the mid 90’s – yikes!). Star Wars has been, and likely will be my single most cherished childhood memory – if only for the fact my love for it continued into adulthood (and even better to the next generation! My son is a HUGE Star Wars nerd).

Life is always shaky and wild at the best of times, having a common mythology to look inwardly to was always something I was happy to have in the tales from that galaxy far far away. In recent years this once beloved universe had begun to slip by the wayside; well my friends all that has changed. By now you’ve surely heard the news about Disney buying up Lucasarts and their Star Wars plans. Well, here’s why its the best news about Star Wars in years.

Alright, lets roll out the big guns first so we can wrap this up and go home. The Avengers. (Insert mic drop here) All those wonderful Marvel films we’ve been enjoying the last few years (including the penultimate comic book movie ever) have been under the careful and watchful gaze of the Disney folk.

Yeah, Disney bought Marvel for the same amount they bought Lucasarts (frankly I figure it was the Avengers money that inspired them to pick up another potential gold mine) a few years back and they’ve done nothing but good things with them. Then personal hero of mine Kevin Smith pointed out why it was a brilliant business move.

With Disney already having the bulk of the little girls of the world well stocked in toys they finally figured out a way to keep the boys hooked as well. People are willing to spend more money on things that are making money; win-win for Star Wars’ future. Disney’s proved they have the history of handling things properly and making them better than we could have ever hoped.

Lets be realistic for a second. Star Wars wasn’t going anywhere. Star Trek just had its revival but Star Wars has only continued to taper off. The final sad note being the dwindling interest in The Old Republic (still an entertaining game that offers the best version of Star Wars content currently available mind you). The minimal fan fare around the last release of the series – this time on Blu-Ray! – was less memorable than for the Porky’s Anniversary Blu-Ray (yes that was a thing).

I haven’t been personally excited about anything Star Wars in a good long time, and it isn’t like they stopped coming out with good things. I just couldn’t get excited about them. This was becoming a property as poorly handled by the original creators as NBC handles Community.

The slowly flowing deluge of sub par kid’s toons, rehashed LEGO games, and Frankensteinesque amalgamation of Original and Special Edition trilogy constant remixes and rehashes was beginning to drown even the most stalwart of fans in a sea of sadness and despair. Star Wars might not have been dead, but it was certainly terminal.

Disney is just the shot in the arm everything Lucasarts owns needs (including Indiana Jones!) and I’m happy with this news. Announcements for an Episode 7 in 2015 was one of the first things I’d heard that made me feel this was on the right track. New Star Wars films? Look even further down the road to the collaborative power of Disney+Pixar+Lucasarts. I don’t know what movie it is they’re making but I’d watch it. Maybe even these three carry enough weight to get Nintendo make a Legend of Zelda movie.

Just imagine it. The old school Disney movies you loved as a kid (Sword in the Stone) meets the guys that made Toy Story, where the effects are done by the Lucasarts guys, and its a movie about a kid in green tights that saves a princess from an evil wizard with a magical triangle. I can’t wait to watch it.

The last minute addition to the party that really brings it all together. Let's face it how else could you get past that Balrog without your Gandalf? (Yes I just compared myself to Gandalf, deal) A fan of comics, video games, sci-fi, fantasy, rolling dice, and tapping cards. Essentially he's the nerd renaissance man. Also he can cook. And do laundry (sort of).
View all posts by Jeremiah Cochran »