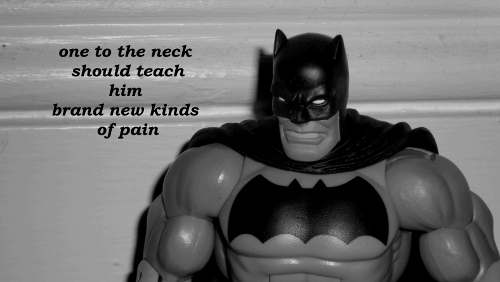 In 2003 Mattel launched a line of 7″ scale figures featuring Batman and an assortment of villains and allies, all of varying degrees of quality and complexity.  This line then began to be alternated with waves of Superman figures, before finally giving way to the DC Universe Classics line: Mattel’s answer to the competing Marvel Legends figures, and a series that would become legendary for inspiring customer frustration.  It seems we’ve now come full circle, and Mattel’s once again has a collector-oriented line focused entirely on the residents of Gotham City, entitled “Batman Unlimited”.  I was heavily invested in all the lines that led up to this one, buying almost every single figure for around six years, until I eventually had to sell the bulk of my collection.  Even though I do still have a modest shelf of Batman toys, thus far the Unlimited line has not really piqued my interest.  The figures are expensive, there are only around three released at a time (taking any and all fun out of sifting through the pegs at the store), and I generally just try to be a little more careful with my purchases these days.  Today, however, “responsible” lost a critical battle with “fanboy”, and I walked out of Target with a brand new figure based on pre-crazy Frank Miller’s magnum Batman opus, The Dark Knight Returns.

The packaging is fairly bland, as is the case with most packaging destined for the action figure aisles of big-box stores these days.  There’s no fancy card art, although the insert with the iconic silhouette and lightning bolt imagery from the comic is a nice enough touch.  The logo they’re using to headline the boxes, however, is decidedly unattractive.  The “Batman” portion is by far the worst in a long line of attempts to shoehorn Batman’s name into the shape of his logo, and the “Unlimited” part looks really lazy and tacked on, like they hadn’t named the line until the very last minute.  Which, I suppose, is entirely possible.  Why they’re still running with it in wave 2 though, I’m not sure.  The back of the card features a shot of Batman and future-Robin Carrie Kelley, with a brief plot synopsis of The Dark Knight Returns.  None of this matters all that much to me since I’ve opened almost every figure I’ve ever bought, but it all feels pretty bare bones for a $17 toy.

The figure itself, thankfully, is much nicer.  It’s bulky and solid, without any of the shoddy paintwork or rickety, unstable joints that plagued most of the DC Universe Classics line.  Little details like the belt pouches and boot treads are well done, and feel faithful to the Frank Miller designs that inspired the figure.  The boots and gloves have sculpted-in creases that look appropriate for Miller’s aging and run-down take on Batman, but unfortunately the wrinkles and folds in the overall costume that have been captured so well in DC Direct versions are lost here.  It still looks good, but the end result feels a little like Frank Miller by way of Ed McGuinness.

Articulation is good, and doesn’t take away from the sculpt in any area.  The “ab crunch” joint even helps with regaining a bit of that hunched-over look that might have otherwise been completely lost in translation.  The hip joints are somewhat inhibited by the shorts, but it’s a worthwhile trade-off for having the shorts actually sculpted instead of just painted on.  And as with any figure featuring a rigid plastic cape, you’re not going to get much out of incredibly poseable legs anyway.  Perhaps most importantly in the sculpting department, the feet are the right size for the body, and the figure stands freely without resorting to a base or endless attempts at meticulously counterbalanced poses.  As someone whose toys are all standing on the edges of shelves several feet above carpetless floors, this sort of stability is key. 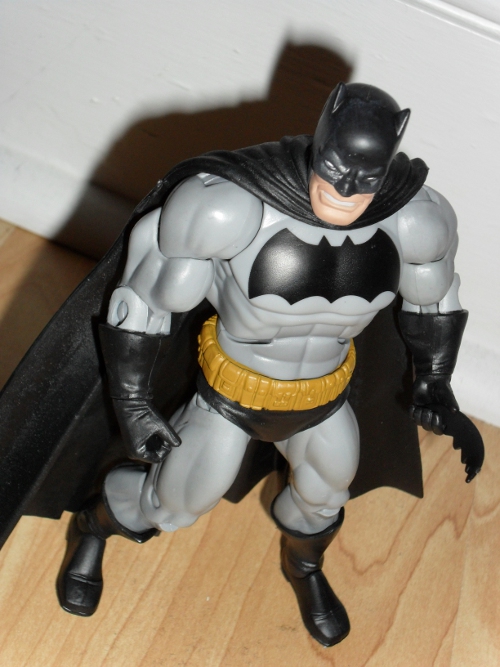 My only major complaint is that the figure’s only packaged accessory is a lone Batarang, molded from the sort of limp, ineffective plastic that is permanently bowed before even taking it out of the box.  For $17 it doesn’t seem like asking too much for Mattel to include a grappling gun or something, but if all you’re going to throw in is a single tiny Batarang, at least make it less sad.  It’s a shame, because the left hand is actually sculpted in such a way as to hold the weapon really well, but from most angles the droop is really obvious.

All in all though, this is a really nice figure, as evidenced by my immediate impulse buy.  I didn’t already have any sort of “old man Wayne” figures in my collection, so this fills that spot nicely and does fit in better with what I already have than the more faithful but often statue-like representations from DC Direct.  I seriously doubt they will, since the character is both Robin and a girl, but if Mattel were to make a Carrie Kelley figure in this line, I’d definitely buy it.  And since she’d require very little plastic in comparison to other figures, it should be easy to budget in a few extra accessories for Batman along with her slingshot.  You hear that, Mattel?  It’s a good plan.  Sell me two things.

I like watching movies, and then talking about those movies. Sometimes I write things about them, which you should read. Other interests include boxed wine, video games, the works of Harlan Ellison and HG Wells, and being a general curmudgeon.
View all posts by Ryan Searles »